Amari Cooper is entering the third year of his bright young career. Year three is usually when most players have the breakout year.

An important developmental milestone signifying players finally being able to put it all together. The game has slowed down, their heads aren’t spinning from cerebral complexities and those with longevity in mind have conditioned their bodies accordingly. Last year, it was Defensive Player of the Year Khalil Mack and 2016 Castrol GTX Clutch Performer of the Year Derek Carr’s third years and boy, did they show out.

Ever the perfectionist constantly searching for new ways to improve, Cooper has been blessed with the presence of Calvin “Megatron” Johnson Jr.

Johnson was invited to OTA’s as a special guest coach by offensive coordinator Todd Downing. Downing and Johnson go back to 2009 and his time in Detroit. Cooper could stand to learn much from the legendary receiver. But being the football purist that he is, even Cooper would be honest when it came to comparing styles.

Physically there isn’t any comparison between the two of them, Johnson was Cooper’s superior in every way. But what they do share is a similar steely-quiet and non confrontational demeanor. Cooper was as polished as they come when he was drafted out of Alabama. However, after a nasty incident with Adam “Pacman” Jones, which saw him being dominated physically on the field, his toughness has been questioned.

This incites flashbacks of a question then Lions general manager Matt Millen asked Johnson. “Have you ever been in a fight before?” Johnson replied that he had not. “Then you better learn how to fight.”

Defenders are of the belief they can shut the Raiders dynamic duo of Cooper and Michael Crabtree down by roughing them up. Much like defenders opposing Johnson tried to do in his early years. Cooper may not be as large as Johnson but is by no means a small man and at the tender age of 22, he hasn’t even finished growing yet. Cooper should greatly benefit from Johnson’s presence. He has peppered him with questions about everything from training techniques to how to run routes and an all-pro suggestion is worth a thousand reps.

Seeing Johnson at team headquarters brought on feelings of nostalgia, in 2007 Johnson was the number two pick in the draft to the Detroit Lions. Exactly one pick after the Raiders wasted theirs on arguably the great-granddaddy-of-all-busts, Jamarcus Russell. Ah, another piece for another time but alas it’s time to exit memory lane and be that as it may Cooper has a rather interesting opinion on his own struggles.

The path to greatness starts with achieving self-mastery. In all things one must strive to be the best possible version of one-self. -Philip Robinson

A half-hearted attempt at humor mixed with an equally true sentiment usually makes for a Chinese proverb. If you have or have not paid attention Cooper is a real quiet seriously cerebral player.  While many people would point to his slump and would use it to question him, he sees it as motivation.

Of course it’s been on my mind, I think of it as a good thing to me because I feel like I can go nowhere but up. I know that I can have a lot more production than I’ve had. -Amari Cooper

An ideal temperament to have in a young and burgeoning superstar, Cooper used this offseason to focus on details. The devil is always in the details and it’s precisely how the New England Patriots have become the success they have. Notorious for having the second most drops in the league his rookie season, Cooper rectified his drops in 2016 and continues to find ways to get better at them now. A nugget he chose to drop (no pun intended) was working on “not trying to run before you actually have the football.”

Cooper has been unreal at times, in fact, attempts to cover him with one man have been futile on occasion. He has dominated some of the best corners this league has to offer already. He has also been rendered largely ineffective at times as well. A popular opinion for some of his decline in production is they way he was used. 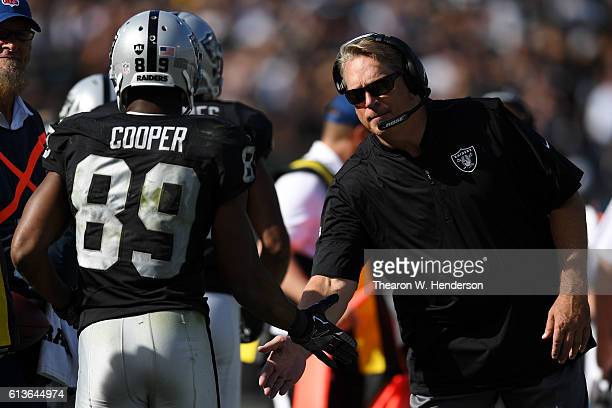 Certainly there are things that we think we can do to help. But also for him he has a much greater understanding, I thought last year was a step forward and I know that he wants to continue to push. -Del Rio on Cooper’s late season struggles.

The “end of season struggles” Cooper has endured haven’t gone unnoticed by Del Rio; however, like any good coach, Del Rio has his player’s back.

It’s great when you have a young talented player that’s really eager to be special, he wants to make a mark in this league and the way he’s working at it right now is outstanding. -Del Rio on Cooper’s talent

Del Rio knows his player is poised and is ready to do the work necessary to become great. At 22 years old Cooper is still a baby in the league. Cooper has been the first Raiders wide receiver to have a 1000 yard receiving season not only as a rookie but his first two seasons in the league. He’s made two consecutive Pro Bowls, is nowhere near his physical prime and he’s just beginning to sniff his potential.

The Plan to Break Cooper Out

A combination of factors are at play here, the strategies utilized in the beginning of the season which incurred success were analyzed then neutralized. Lacking multiple functional adjustments and/or failing to devise a way to dictate how defenses were forced to play him, Cooper suffered statistically and physically. The Raiders choose not to renew the contract of former offensive coordinator Bill Musgrave in the early offseason and instead promoted Todd Downing.

For the record, it’s not all Musgrave’s fault nor is this meant to imply that it is. But where there’s smoke, there’s fire and mentions of opening things up have been circulating. The more telling sign, there’s yet to be a player to step up and say it was hard to see him go. While the last five of six regular season games were played with a broken-pinky having quarterback who would add a leg for the two-piece fracture combo, a preseason hall of famer and a green MSU rookie it’s no surprise Cooper slowed to a crawl.

Questioning the amount of fight in a man is a slippery slope bordering on disrespectful. Years ago future Hall of Fame linebacker Ray Lewis coined the phrase “Be pissed off for greatness.” Proverbial in nature because only through seriousness and dedication on a level teetering on the edge of O.C.D. do you become great. So no one cares more than he does. When on the field, Cooper plays wide receiver like an old Big 12 running back, getting better with every touch. While he is a beast with an insatiable appetite for devouring defenses, when the team is struggling and he’s not eating, Cooper doesn’t come across as the “throw me the damn ball type.”

Unafraid to seek the advice of others who have enjoyed success, Cooper is priming himself for a breakthrough performance. The Raiders have done everything they could possibly do to carve this team into their own “Ministry of Darkness”. With quality offensive weapons complimenting him, Cooper should see less double teams and more open spaces for him to work. With Derek Carr being rumored the freedom to call more plays at the line of scrimmage, a la Peyton Manning, the better it will become for the team’s playmakers.

Adopting a better game plan will help Cooper statistically but he needs to continue to work on taking better care of his body to maximize longevity. Last but probably the most important thing of all, is to go out and have fun, live in the moment and be the best Amari Cooper he can be moving forward day in and day out.

1 thought on “Breaking out Amari Cooper”