The following is a work of satire and humor about the upcoming Raiders vs. Broncos game. It may contain offensive language and imagery, and as a result it should not be read by anyone.

Greetings, Raider Nation! It is I, the sausage in your McMuffin, the Bailey’s in your coffee, and the Tabasco sauce on your omelette, Raiderdamus the Great and Powerful. I come to you today hopeful, after a correct prediction of a Raiders victory in Cleveland and a divisional game on the horizon. Christmas weekend is upon us, and Raiderdamus’ gift to you all is yet another message from the Great Beyond, whose jolly self has some words for Raider Nation as well as all the hoe-hoe-hoes in Denver:

“The Broncos are a team which prides themselves on  strong quarterback play, yet the best QB they have ever drafted is Jay Cutler, who is the all-time passing leader for… the Chicago Bears.”

Denver’s best-known player is of course John Elway, the first man to serve as a team mascot and front office executive at the same time. 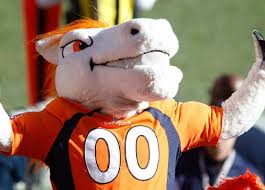 Elway formerly held the title of general manager, but was recently reassigned to the position of President of Football Operations when George Paton was hired as the new GM. One presumes these “football operations” amount to sitting in a suite during games while looking disappointed, as well as not saying a damn thing during draft weekend because Paxton Lynch exists. The ownership of the Broncos is currently in a trust, but once a new owner buys the team, they will almost certainly have something to say about John Elway’s role with the team.

Thankfully, Elway does not control every aspect of the Broncos’ organization. For instance, he does not design their merchandise. Elway went to Stanford, and while that may not count for everything in life, we can at least assume that Elway knows how to spell the name of the team he works for.

Elway is also smart enough to know that if you tilt the Broncos logo ever so slightly, it looks like the horse is drowning. He would not be so foolish as to sell a decal like this: Fans from other AFC teams, such as the Raiders, know that the Broncos are not the best at making decisions. After all, the Broncos found themselves in a division with Patrick Mahomes, Justin Herbert, and Derek Carr, and said to themselves, “Teddy Bridgewater ought to be able to get it done.” Perhaps that might have been true before Bridgewater’s leg fell off in 2016, but it’s not true now and never will be again. Drew Lock may one day lead the league in touchdowns, but they will be thrown to the other team.

Denver was probably wise to punt their quarterback decision until next year, because punting is what they do best. They likely figure that Aaron Rodgers will be done freezing his nuts off in Wisconsin and will prefer to freeze them off in Colorado. Rodgers may provide Denver with the privilege of putting themselves in salary cap hell for two more years of losing to the Chiefs. But this is all in keeping with the spirit of Denver, which was founded by cowardly pioneers who made it to the Rocky Mountains and said, “Screw this, we’re stopping here.” The Broncos are tired of drafting bust quarterbacks and will simply pay star quarterbacks on the verge of retirement from now on and hope for the best.

Let’s look back fondly on Denver’s 3-0 start, where their fans thought they were such hot shit for beating three teams that were a combined 0-9. In true pioneer spirit, the Broncos sent smallpox blankets to the Jets, Giants, and Jaguars before the season started, and they still haven’t recovered. Denver hasn’t suffered from COVID outbreaks like many teams, because you can’t spread viruses in a city where the air is too thin to breathe.

Despite the fact that the Broncos don’t have an owner right now, things could surely be worse. The Nuggets and Avalanche are both owned by Stan and Ann Kroenke, and they’d surely own the Broncos by now if they didn’t already own the Rams. Perhaps some big city businessman will buy the Broncos and move them to New York City so the nation’s biggest metropolitan area can have a real football team that isn’t Rutgers.

The Broncos sport a strong defense, but Lock isn’t winning anything except the Worst White Rapper category at the MTV Video Music Awards. Kudos to Lock if he makes it out of Las Vegas without getting a stripper’s name tattooed on his rear end.

Will Hunter Renfrow have 100+ REC yds vs. Broncos? - Powered By PickUp

Fantastic as always! Thanks for bringing us articles every friday. Best part of my friday before 5pm! Merry Christmas!!!