The following is a work of satire and humor about the upcoming Raiders vs. Colts game. It may contain offensive language and imagery, and as a result it should not be read by anyone.

Greetings, Raider Nation! It is I, the party in your hat, the bubbles in your champagne and the Dick in your Clark, Raiderdamus the Great and Powerful. I wish you all a happy New Year and I come to you today ecstatic as the Raiders are still alive in the playoff hunt following a correctly predicted victory over the Denver Broncos. The Raiders held Drew Lock in check all game, and the only offense the Broncos could muster was the way they made their fans feel because of that game. On to a new week, where the Raiders must face yet another AFC playoff contender.

In keeping with tradition, I have once again asked the Great Beyond to make his wisdom known about this upcoming contest against the Colts:

“The only thing more wasted than Andrew Luck’s career is Jim Irsay in the back of a limousine.“

I usually get on the case of teams who relocate to new cities, like the Chargers, who moved to a city where nobody cares about them, but the Colts did the right thing. Unlike the Browns, who moved TO Baltimore for reasons I can only assume included Art Modell’s wanting to experience more senseless violence in his city, the Colts moved away from Baltimore in 1984. They told Baltimore’s city council that they were going out for a pack of cigarettes and then left in the middle of the night and never came back, which is common in Baltimore.

The Colts found their new home in Indianapolis, home to the Indianapolis 500. The Colts fit right in, because they also drive for three hours on the weekend and don’t accomplish anything. The good people of Indianapolis know better than to expect a winner. That’s because they’ve watched the Pacers since 1967. Indiana is also home to Notre Dame, but any serious football fan knows that their chances of winning anything are as real as Manti Te’o’s girlfriend. Indiana is also home to Gary, a city as close to post-war Stalingrad as you will find in the USA.

In 2006, the Colts called this play, which is the Gary, Indiana of special teams plays. 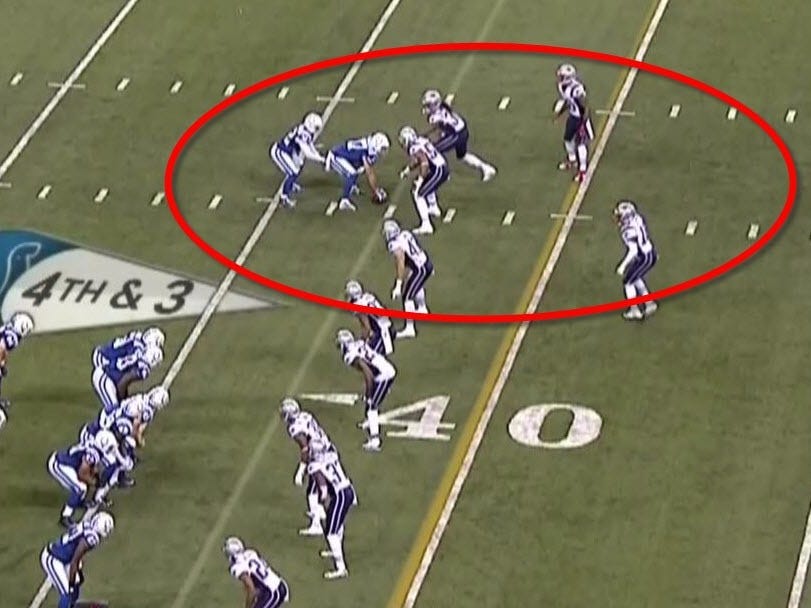 What’s worse, the Colts did this against Bill Belichick, who can talk about special teams without stopping for a solid month. Then-Colts coach Chuck Pagano called this play. Pagano is well known for bravely beating cancer, but that’s about the only thing he could beat. The worst thing is that he must have called this play because it worked against their defense in practice.

Over their long history, the Colts have had three generational quarterbacks, and they have managed a whopping two Super Bowls. The Ravens have that many and have earned them with the football equivalent of Sidney Ponson at quarterback. Johnny Unitas and Peyton Manning each won one Super Bowl, although Manning also won a Super Bowl for his hometown New Orleans Saints while in a Colts uniform. Andrew Luck was drafted in 2012 but never got close to the Super Bowl, as the Colts had a defense made of Swiss cheese and an offensive line consisting of traffic cones and fence posts.

Unfortunately for the Colts, Luck’s shoulder was made out of Bob Sanders’ knees and Jeff George’s ego. Obviously, it would not remain intact forever. Luck had shoulder surgery in 2017 and stayed down longer than a Marvin Harrison shooting victim, returning in 2018. That would be the last Colts fans would see of Luck, who announced his retirement before the season in 2019. Colts fans booed heavily when the news was announced, which makes sense, because people who live in Indiana have long since stopped being able to appreciate anything that isn’t crystal meth or ranch dressing.

It’s no wonder that Peyton Manning went to Denver. There, he went to two Super Bowls in three years and turned down a one-day contract to retire as a Colt. A side note, he still lives in Denver today. John Elway was right to reject the Colts, and so was Manning, and so was Pat McAfee. The latter being a better podcaster and announcer for WWE Smackdown than he ever was as a punter. People can only realize their true potential when they leave Indiana. Just ask Larry Bird.

Following Luck’s retirement, Indy turned to Jacoby Brissett for a year. That went about as well as you might expect, and then they signed Philip Rivers, who has more kids than Luck had playoff wins. Following Rivers’ inevitable failure to make a deep playoff run, the Colts traded for Carson Wentz. Wentz once tore his ACL while flying through the air, and then his team won the Super Bowl without him. For a team with a horseshoe as their logo, the Colts sure are unlucky.

The Colts, however, can largely ignore Wentz’s abilities because they have Jonathan Taylor, the best running back in football today. He has an easier time running through the tackles than Jim Irsay does walking a straight line during a field sobriety test. If the Raiders can hold him under 150 yards, it will be a minor miracle. The Raiders will be playing for their playoff lives and for the memory of John Madden, but even that may not be enough.